Less than 24 hours after the terror attack at Ariana Grande’s Manchester gig, thousands joined together at a vigil in the city last night (23 May) to honour the 22 people who were killed and 59 who were injured.

Waving ‘I Heart Manchester’ placards, many sought to send a defiant message that they would not be cowed by fear, nor exploited by those who seek to divide them.

Held in Albert Square outside the Town Hall, crowds spilled into nearby streets. At 6pm, a respectful silence descended, before the Lord Mayor of Manchester, Eddy Newman, began the vigil by thanking the emergency services. “The people of Manchester will remember the victims forever and we will defy the terrorists by working together to create cohesive, diverse communities that are stronger together,” he said. 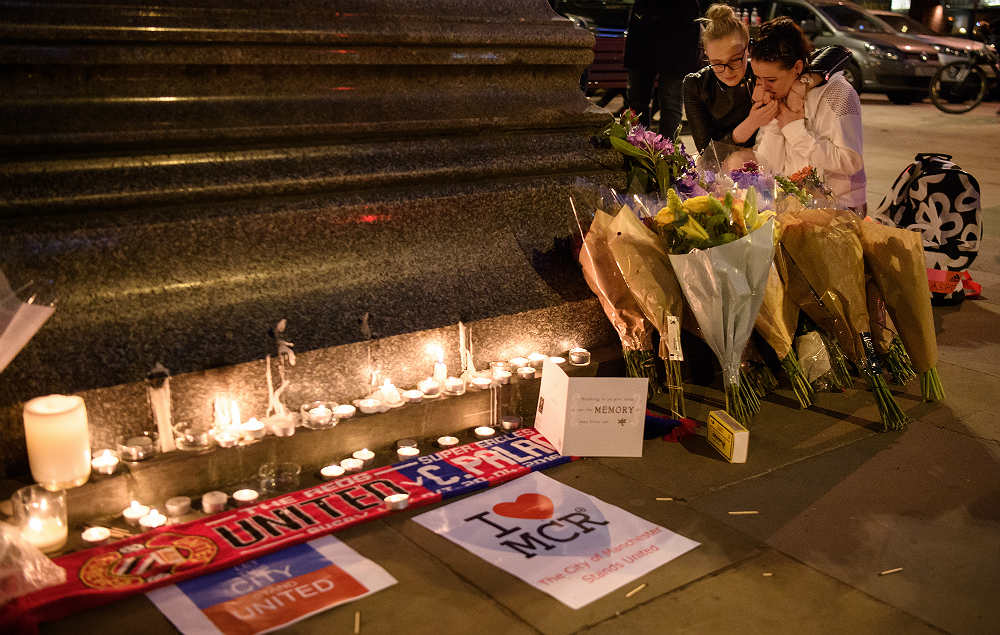 The Bishop of Manchester, the Rt Rev David Walker, who lit a candle to remember the victims, said that “whether they are local people or from farther away, from now on, they are Manchester too.”

Following a day in the city where armed-police were visible on the streets, there was a sense of those in attendance finding catharsis through unity. Many found comfort and pride in the way Manchester had reacted to the tragedy and the acts of kindness happening in its wake.

Like many there, 28-year-old student Joseph Beverly struggled to hold back tears. “I haven’t cried like this in a few years,” he said. “It’s touching. It was really beautiful. “Shellshock’ is the only way I can describe the mood today, but we’re an industrial city that’s bred to keep going and survive.”

Brandishing a home-made sign emblazoned with ‘No Fear Here’ and the CND peace symbol, Nathaniel Thornton had travelled from Burnley to stand firm in the face of atrocity. 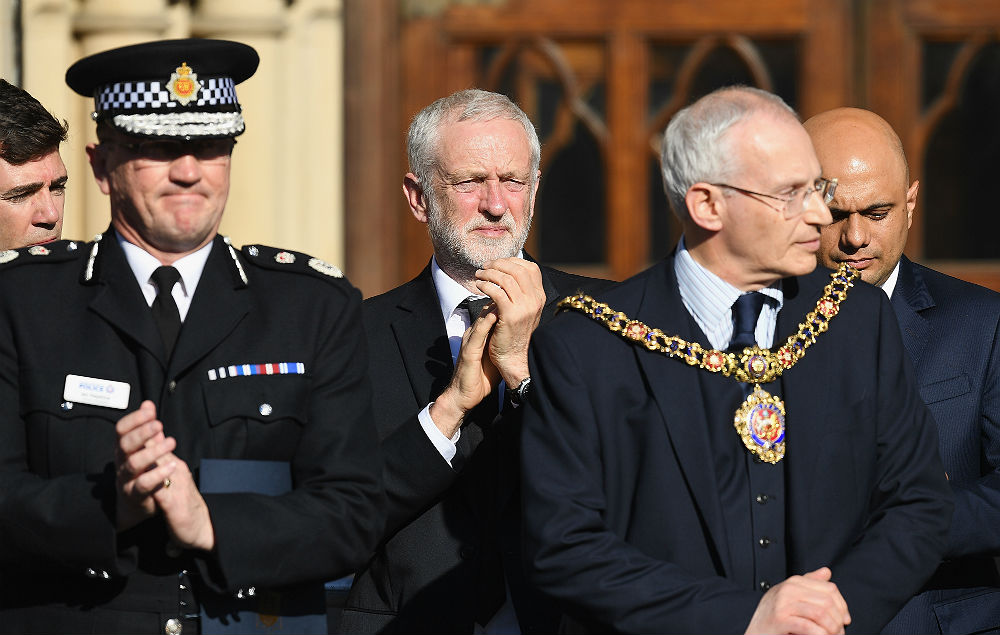 Jeremy Corbyn at the Manchester vigil

“As awful as the act yesterday was, the whole point of them doing it is because they want to break up communities, break up alliances, and break the spirit of the city,” said the 26-year-old. “We had to come and show support and show strength. They want us to feel weak and that’s absolutely not what Manchester is about – we’re a strong, stubborn, northern town.”

“It’s to show solidarity with the victims as well,” he continued. “People warned us it’s too dangerous to come here. But those people last night lost their lives in vain if you don’t go out and live your own life. If you stop what you’re doing, it’s an insult to their memory.”

Courtney Sumner, 25, who helped him create the banner, added: “I went to work this morning and everything seems to make you feel a bit shit – this is part of the healing.”

There was a feeling of people grappling to make sense of the senseless – while at the same time resolutely sharing the sentiments of a placard that was held up: “ISIS Don’t Scare Us, We’re Manc”.

Joe Askey, 20, knew people who were at the gig who fortunately escaped with only minor injuries. He said: “I just wouldn’t think anything like this could ever happen. When it does, you don’t know how to feel. You’re sad and angry and in disbelief. But we’ve all come together to show support for each other and show that we won’t let this beat us.”

While some of social media caved in to knee-jerk racism, Manchester inspired with a quiet, dignified compassion and solidarity – sending a clear message that hate would not triumph.. The city’s Sikh Community handed out free refreshments. Offering Coca-Cola, crisps and water, Baljit Singh, 34, echoed the views of the multicultural throng when he said: “It doesn’t matter which community we belong to, we’re all part of Manchester and we don’t fear anyone. Our diversity only makes us stronger – as the world can see tonight.” 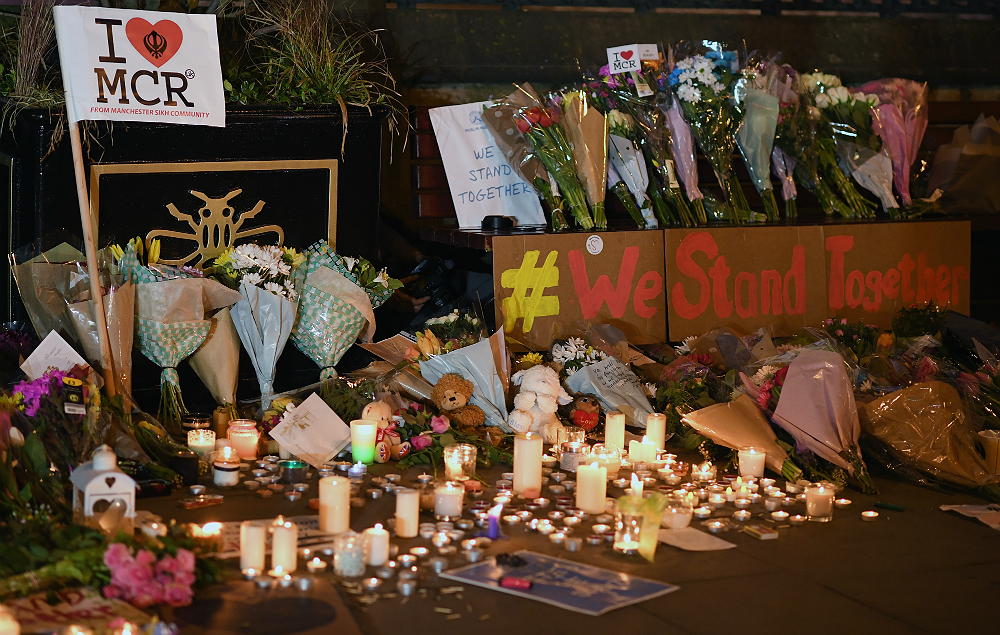 Flowers were laid by monuments; next to mementos like football scarves and cute fluffy toys – serving as a heartbreaking reminder of the young age of some of the victims. “Who cannot want to come down after hearing about everything?”, questioned one woman in a headscarf rhetorically as she lit a tea light among the many that flickered – some of which had been arranged into the shape of hearts. “I love this city and I will not let this hatred disunite us.”

Having just finished hugging a lady in a burqa, Becky Brown – a 21-year-old student who identifies as queer and has drawn the Manchester worker bee on her face – said “it’s been uplifting to meet so many people from every walk of life. We shouldn’t forget that Muslims were at that gig too. When Manchester’s heart goes out, it goes out to every culture.”

Like others here, rather than being deterred from attending gigs, she wants “to go to a concert there [Manchester Arena] soon to show we aren’t scared. Terrorism means terror – but I’m not terrified.” Conversely, they wanted to go to more gigs – because, as one person said, “This makes you realise how short life is – and how you need to grab joy.” 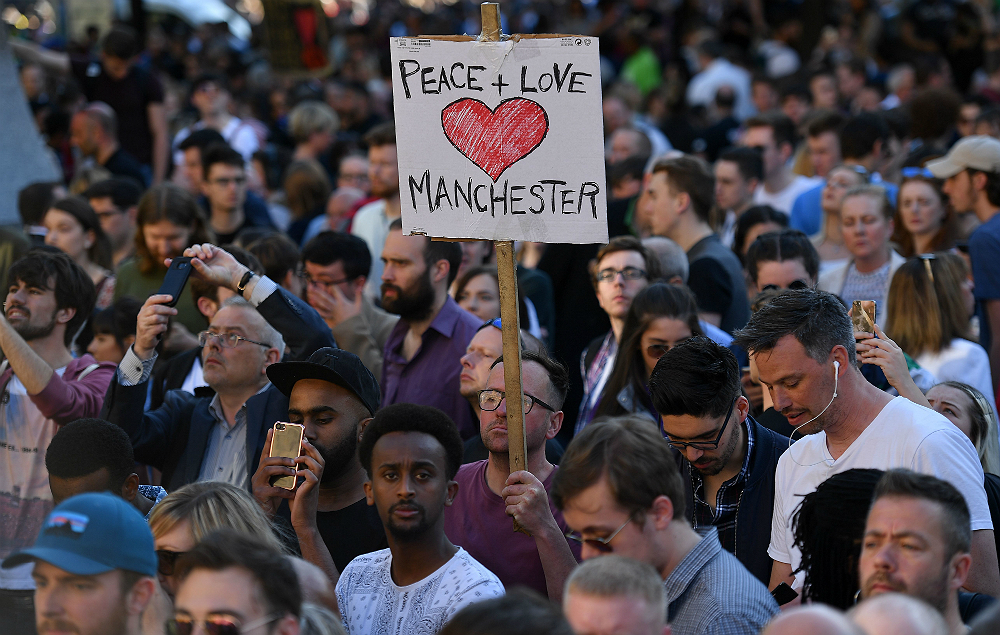 Holding a sign that reads: “Free Hugs”, Abigail Thorne expressed the problem of instinctively wanting to help – yet feeling helpless to do so. “I’m a student so I have little money to give and I have heart conditions so I can’t give blood. This feels like the only thing I can do to help,” said the 24-year-old.

“A hug is the rawest form of communication to show you care. I’ve seen the whole spectrum of emotions – from people who are happy to get a free hug to those who are devastated and need someone to tell them it’s going to be okay for a little bit.”

On the stage, poet Tony Walsh, aka Longfella, performed a rapturously-received ode to Manchester, ‘This Place’, even eliciting laughter in places. “If you’re looking for history, then yes we’ve a wealth,” went one verse. “But the Manchester way is to make it yourself/And make us a record, a new number one/And make us a brew while you’re up, love, go on.”

Deftly summing up the mood, he peaked with: “Oppressions, recessions, depressions and dark times/But we keep fighting back with Greater Manchester spirit, northern grit, northern wit and Greater Manchester lyrics/ And there’s hard times again in these streets of our city/ But we won’t take defeat and we don’t want your pity because this is the place where we stand strong together with a smile on our face, Mancunians forever.”

As the spontaneous chants of “Manchester! Manchester!” continued to fill the summer sky long after the half-hour vigil had finished, 20-year-old Robbie McGregor said: “We’re a tight-knit community and they’ll have to do a lot more to break us up.”

“I wish I could think of a word to describe what it means to see people from every culture, every religion, comforting strangers on the street.”

Perhaps that word is, simply, “Manchester.”

The post “We won’t let this beat us” – Manchester unites against terror at vigil appeared first on NME.