Harry Styles was joined on stage by Stevie Nicks during the former’s headline gig in Los Angeles last night (May 19) – watch fan-shot footage of the duet below.

The Fleetwood Mac frontwoman made the surprise appearance at the former One Direction singer’s show at the city’s Troubadour venue – his debut solo gig in LA.

Nicks joined the ‘Sign Of The Times’ singer firstly for a rendition of Styles’ single ‘Two Ghosts’, which featured on his self-titled and now chart-topping debut album. The pair then performed the Fleetwood Mac track ‘Landslide’, which featured on the band’s 1975 self-titled album. During that performance, Styles briefly leapt into the audience and stood and watched Nicks sing.

Watch fan-shoot footage and photographs of the duet below. 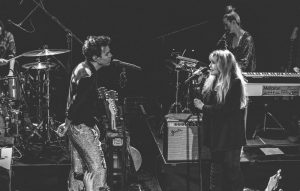 The Late Late Show‘s viral series welcomed the singer for the latest sketch, which saw Styles and the host perform songs by the former as well as covers – including Outkast‘s ‘Hey Ya’.

Earlier this week, Styles filled in for Corden in delivering the monologue on The Late Late Show. The episode’s opening sketch saw the singer make jokes about US President Donald Trump, Hillary Clinton and a news story of a hacker threatening to leak the latest Pirates Of The Caribbean movie (“I guess you could say it’s a pirated video”).