Adele earned wild applause from her audience in Melbourne last weekend after calling out a member of the venue’s security team for telling fans to sit down during her gig.

The Tottenham singer has just concluded the Australian leg of her world tour in support of her third studio album, ’25’. As well as receiving acclaim for her live performances, Adele also attracted headlines for the unusual way in which she made her way to the stage.

The incident in question took place during the tour’s final stop at Melbourne’s Etihad Stadium on Sunday (March 19) after Adele appeared to notice that one member of the venue’s security staff had been telling her fans to sit down through the entirety of the gig. 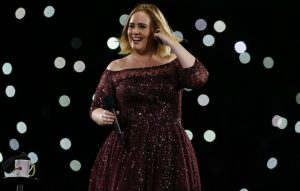 After finishing one song, Adele took the matter into her own hands and addressed the member of security in question.

“Excuse me sir, I know you work here, but can you stop telling people to sit down,” she said from the stage. “This is a music show, if people can’t see then they can stand up and if you’re moaning about people dancing, then what the fuck have you come to a show for?”

“If I see one more person being told to sit down, I swear to god! Excuse my language.”

Watch the incident below.

Last week, Adele visited the set of Neighbours – see what went down when the ‘Hello’ singer went to Ramsay Street.

The post Watch Adele call out security staff for telling fans to sit down mid-gig appeared first on NME.

Watch Adele freak out over a mosquito ‘sucking her blood’

Watch Alicia Keys do impressions of Adele and Gwen Stefani