Scott M. Gimple has offered the opinion that there’s “not a vast gulf” between the show’s long-running hero and its current villain

The Walking Dead‘s showrunner Scott M. Gimple has claimed that there isn’t a huge difference between the show’s hero Rick and its current villain Negan.

The long-running AMC show’s current antagonist was introduced in the final episode of its sixth season, and dominated much of the narrative in the seventh season, which concluded back in April.

Ahead of the return of the show on October 16 – where it’ll kick off with The Walking Dead‘s 100th episode – Gimple has discussed the similarities between Rick and Negan, who are set to go to war against one another in the show’s forthcoming eighth season. 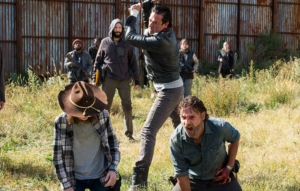 “I think if we followed Negan, we might even be in the same place that we are with Rick where we’re like, ‘Whoa. What you’re doing there seems like the behaviour of a bad person’,” Gimple told ComicBook.com. “What’s interesting is, I think for Rick’s experience, he’s justified in what he’s doing. The world has formed him this way, and what he’s done has generally been a reaction to being threatened and trying to make sure his people live.

“Things are getting greyer and greyer and greyer. But I think the things that Rick has done, you can hold up against the things that Negan has done and it’s not a vast gulf between those two, but the way that they operate is very different. Their philosophies are very different, and that’s maybe where we see one person being the hero and one person being the villain.”

Gimple has made a number of claims about season eight since April, and recently teased that the new episodes will move at a “breakneck pace” when The Walking Dead returns in October.

The post ‘Walking Dead’ showrunner says Rick and Negan aren’t very different from one another appeared first on NME.

Why 10,000 Rick and Morty fans are petitioning for the return of an obscure 1990s McDonalds sauce