At least seven artists who were booked to play at SXSW 2017 have been turned away at the US border over confusion about visas.

Typically, bands and artists playing at SXSW can enter the US on a B-1 visitor visa – which is usually issued to tourists, under the provision that they undertake no paid work while visiting the country – as they are not being paid for their appearance at showcase events put on by the festival. Those acts who wish to tour the country, however, must obtain a P-1 visa.

U.S. Customs and Border Protection officials issued a statement on Monday (March 13) advising those who intended to perform at SXSW would need a P-1 visa in order to enter the US. 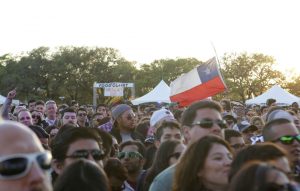 It is has now emerged that seven musicians have been blocked from entering the country for only possessing a B-1 visa, including three members of the Egyptian-Canadian post-hardcore band Massive Scar Era (via Billboard). This follows the widely-reported turning away of Italian band Soviet Soviet and the London-based drummer Yussef Kamaal.

Massive Scar Era vocalist and guitarist Cherine Amr told Billboard about their encounter with a border official. “He said that he knows that I’ve done everything legally, and that I’m not lying, but he’s still not going to let me in,” she said. “He said that people are using the festival to protest, but I told him we are not going there to protest. We have no intentions of doing anything illegal or engaging in any political activity. We’re just going to promote ourselves, meet labels and bookers, and network.”

A spokesperson for SXSW confirmed that event officials “know about the situation” and “have spoken to the artists.”

The post US visa confusion denies seven musicians the chance to play at SXSW 2017 appeared first on NME.

M.I.A. is to play first US shows since visa ban