No, he didn’t make ScumFuckFlowerBoy.com

Tyler, The Creator has officially denied making a mysterious website teasing new music from the artist on May 5th.

ScumFuckFlowerBoy.com has been causing a frenzy amongst fans who believed that the website (which features only a countdown clock, a space for entering a password to access the full site, and the words ‘May 2017’), contained clues about new music to be released by Tyler in the coming few days.

Fans have been speculating for a while that the title of Tyler’s new album will be Scum Fuck Flower Boy, though nothing concrete has yet been announced.

However, Tyler, The Creator was quick to shut down the rumour that he had anything to do with the website, suggesting the link was simply a fan hoax. In now deleted tweets, Tyler wrote “Not my site, y’all gullible smh,” and “like im hot i had to tweet that. shit is annoying, like really? if u aint hear it from me it aint real.” 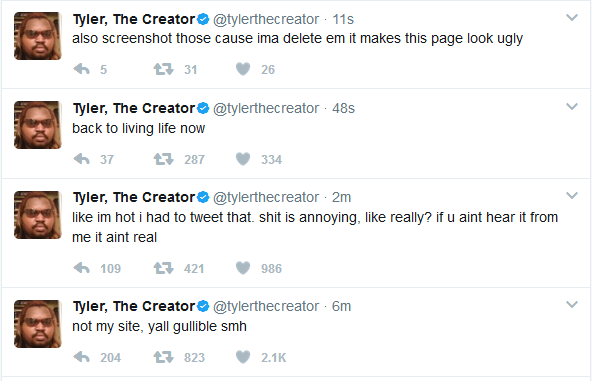 He followed up by writing “back to living life now” and instructed his fans to “screenshot” his tweets “cause ima delete em it makes this page look ugly”.

Fans are currently waiting on the follow up to 2015’s ‘Cherry Bomb’.