“Literally the easiest target in the entire world and you go for a trans joke?”

The US political satire talk show, ‘The Daily Show’, has come under social media fire after tweeting out a transphobic Twitter poll on Wednesday (May 18).

News broke yesterday that the White House Majority Leader Kevin McCarthy was recorded saying that believed that Donald Trump was being paid off by Vladimir Putin prior to his election. ‘The Daily Show’, who were aware that there was a scandal due to release from the White House, tweeted a poll contained a transphobic joke.

‘The Daily Show’ tweeted “What news will drop Thursday?” with one answer suggesting: “Donald Trump announced he is now Donna Trump”. The tweet has since been deleted and ‘The Daily Show’ have yet to release a statement. 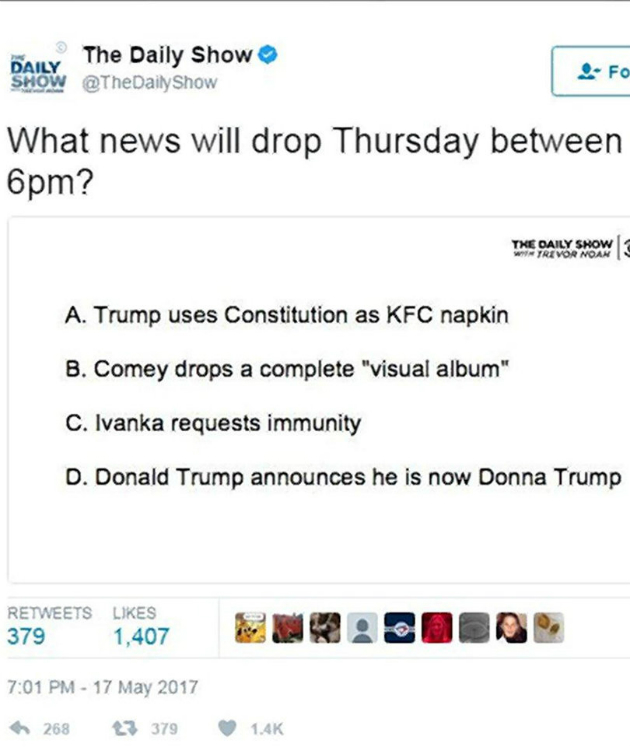 Following this tweet, many people voiced their outrage citing an attack on the transgender community.

Read more: Megan Mullally hints that her character will be married to Donald Trump in ‘Will & Grace’ reboot

After the US President branded ‘The Late Show’ host “a no-talent guy”, Colbert hit back at the president with no restraint, saying: “You’re turning into a real prick-tator. Sir, you attract more skinheads than free Rogaine. You have more people marching against you than cancer. You talk like a sign language gorilla that got hit in the head”.