Alfie Solomons and the Shelbys have been seen in Manchester

Tom Hardy has reportedly been set on the set of the new series of ‘Peaky Blinders‘ – shooting today in Manchester.

Season four of the hit show started filming last month, and is due to hit screens in late 2017. Now, it is reported that they’re filming new scenes up in Manchester – featuring Tom Hardy in character as Alfie Solomons. This comes after he reportedly caught a moped thief in London, before yelling “I caught the c**t“.

As Manchester Evening News reports, fans have been gathering in the Northern Quarter of the town, which has been transformed into a 1920s-style set. Those on the scene claim to have seen both Cillian Murphy and Tom Hardy:

Recent additions to the cast for season four include Adrien Brody, and even ‘Game Of Thrones’ star Aidan Gillan.

The series will begin with Tommy Shelby (Cillian Murphy) receiving a mysterious letter on Christmas Eve which sparks concerns that the Peaky Blinders are in mortal danger.

Fleeing his country home, he returns to Birmingham to prepare for an oncoming war. 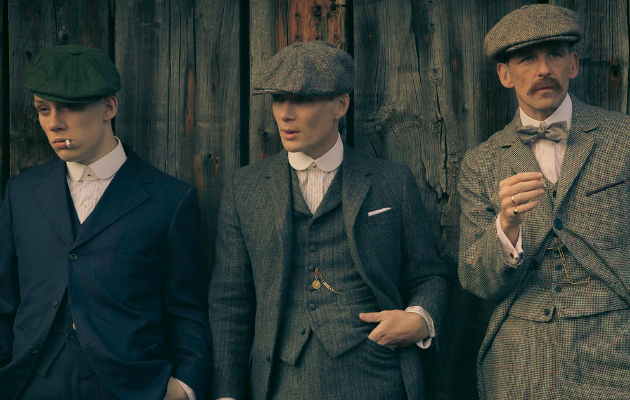 It was previously revealed that a series of photos had emerged from the set as filming started on the new series in Liverpool – showing Cillian Murphy and co filming around the town – including an action scene in which his character of Thomas Shelby is seen running down the street with a pistol.

Last May, the BBC announced that it had ordered a fourth and fifth series. As well as two more series, it was recently rumoured that a Peaky Blinders film could be in the works.

‘Peaky Blinders’ is expected to return to screens in October.