Scott M. Gimple has spoken after the finale of season seven aired in the US last night – it will be broadcast in the UK tonight (April 3)

The Walking Dead showrunner Scott M. Gimple has promised that the next season of the hit show will “melt people’s minds.”

The finale of season seven of The Walking Dead aired in the US last night (April 2), and will be broadcast in the UK later tonight on Fox. Fans of the show and its castmembers shared their reaction to the events of the finale on social media last night (warning: link contain spoilers from last night’s episode).

As fans begin the long wait before the show’s return in October – when it’ll resume with its 100th episode – Gimple has ramped up excitement for the arrival of season eight later this year by dropping the promise that it’ll “melt minds.” 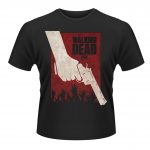 Browse The Walking Dead tees in the NME Merch Store.

Speaking on the discussion show The Talking Dead, Gimple said: “The first four episodes will melt people’s minds and break their televisions. It’s gonna be bigger, it’s gonna be more intense. I always mean that, but this year it’s the same thing – more intense.”

Gimple had previously voiced his hope that The Walking Dead will be on the air for 20 years.

“The [Walking Dead] comic has certainly done it, and I look forward to every issue,” he reasoned. “The Simpsons has been on 26, 27 years, so that’s a challenge — so OK, challenge accepted. Done.”

The first reactions to ‘Pirates Of The Caribbean: Salazar’s Revenge’ are in