‘Every song we recorded was a tribute’

As the release of David Bowie‘s final songs with the ‘No Plan’ EP is announced, the cast of ‘Lazarus’ speak to NME about his last work and legacy.

The latest posthumous release from the late artist, features three songs from his Lazarus musical, as well as the track of the same name from his final album ‘Blackstar’. The EP was released digitally last month on January 8 – Bowie’s birthday.

‘No Plan’, ‘When I Met You’ and ‘Killing A Little Time’ were all tailor-written for the show, and would go on to become his last ever recordings. Now, fans hunt for clues of their meaning, but back then no one was aware that these songs would become the epilogue of one of the greatest artists our time.

“None of us knew that he was sick,” shrugs the young actress Sophia Anne Caruso. “I did wonder because he wasn’t there every day. He was very thin and sat down a lot, but we didn’t think much of it.”

The 15-year-old was among those first cast in what would become David Bowie’s last work, handpicked by the man himself to star alongside Michael C. Hall in ‘Lazarus’ – the stage sequel to the cult classic movie ‘The Man Who Fell To Earth’. Playing the unnamed ‘Girl’, who ‘may or may not be’ a figment of fallen alien Thomas Newton’s imagination. 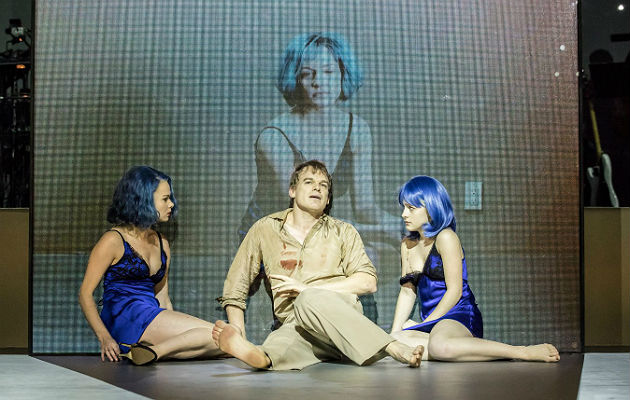 After its second year on the stage, the celebrated London run has come to an end. Throughout the entire period, Caruso certainly felt the shadow of Bowie’s legacy cast over her – but says the sense of honour far outweighs the pressure.

“It was crazy, I wasn’t actually supposed to meet David – nobody was,” she recalls. “I was about an hour away from my audition then I got a phone call that said ‘David Bowie is here and he wants to watch you sing’. I jumped off the bus, sprinted there and made it just in time. I was so clammy and shaking, but David was just very calming, humble and put me at ease. He was very friendly and liked that I sung a Sting song.

“When he died we were all scheduled to do the cast recording for the soundtrack album, then we woke up that morning to the news. We came together and did the album in that day in his honour. It was very special for all of us. There was no better way to spend that day than with the cast and the people he worked with. Every song we recorded was a tribute.”

She adds: “After David died we had only one week left, then we finished the run before they offered me the chance to come over to London and do it. I had to come here to honour David and do it in his memory.”

After Bowie’s passing, the play became much more than a rockstar’s passing project, but his final ever endeavour. It was his lifelong ambition to create a broadway musical, but his death shifted the focus somewhat – attracting not just theatre fans and Bowie nuts, but those both looking for answers in his goodbye note, and casual ticket-buyers misguidedly looking for a feel-good jukebox musical from one of pop greats.

However, ‘Mamma Mia’ it is not. Rather than a gentle tour through’s Bowie’s hit parade or a linear plot punctuated by songs, it’s more of a wild and bewildering fever dream. It lends itself more to the description of an art installation and has also been likened to group poetry. What else would you expect from the mind of David Bowie, but a montage of media to create ‘a feeling’ rather than hand you a meaning on a plate? Naturally, something so bold and ambiguous is going to split opinion – but few foresaw this becoming one of the most divisive works of Bowie’s career. 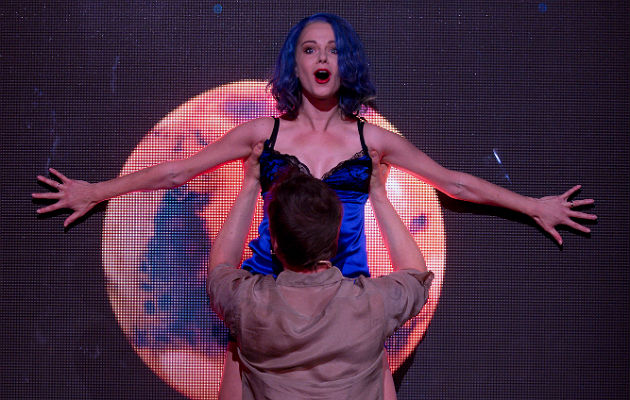 “It’s almost quite entertaining to see the faces of people thinking ‘what the hell am I watching?’,” laughs Amy Lennox who played Elly  – Newton’s assistant who comes to be obsessed and perhaps possessed by his love from ‘The Man Who Fell to Earth’, Mary Lou. “At the end of every show we always get some kind of standing ovation. We feel the love more than anything else, generally. The ones who don’t get it are genuinely in the minority, but you either really love it or you don’t. That’s the best kind of show to be in.”

She chuckles again: “I wouldn’t call it ‘a musical’, that’s not helpful. People think of jukebox musicals like ‘We Will Rock You’, and it’s just not that. It’s an entirely different animal. You can’t compare it to anything.”

Caruso agrees: “As you say here in London ‘it’s like Marmite’ – people either love it or hate it. People who hate it lack the imagination. It’s more like a theatrical experience. You have to go and let it come to you, rather than navigate through it. It’s a different audience every night, and ever since David died the audiences have been looking for answers. That’s fine but what I really want them to do is just sit back and let it come to them.” 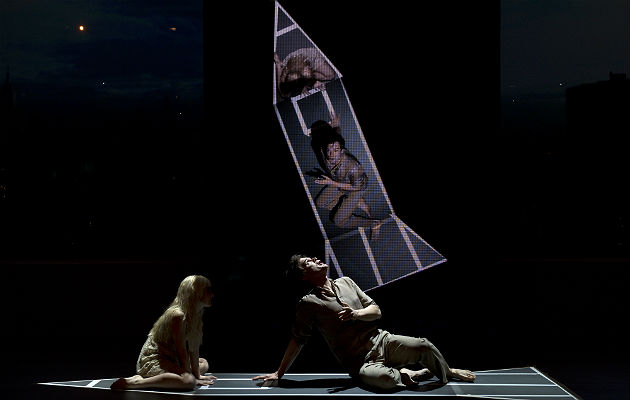 In the wake of his death, many musical tributes have been paid; some good, some bad. Lady Gaga’s controversial performance at last year’s Grammys attracted criticism from former Spiders From Mars drummer Woody Woodmansey and even Bowie’s own son, celebrated director Duncan Jones. However this time, everyone on stage is carrying out Bowie’s vision exactly how he envisioned it.

“Yeah, I did see Lady Gaga’s performance – it wasn’t my favourite,” admits Sophia. “It is really special to know that we’re doing what he wanted. Doing this in London in his homeland is important. It makes my whole life to bring it to the stage every day.”

Amy chimes in: “It gives you that comfort that this is what he had in his mind. It would feel so awful if this was a production that had nothing to do with and was put on after he passed. That would be so heretical. It’s wonderful to feel like you’re still spreading his art.”

And the centre-piece of that vision is this trio of songs that Bowie penned as part of his parting gift – heard first in the show long before Bowie’s recordings would ever surface.

“‘No Plan’, wow,” remembers Amy. “That was a new one and not a lot of people knew it. It’s the most stunningly pure and angelic piece of work. Sophia sings it so beautifully and the lyrics are incredible: ‘I’m lost in streams of sound, I’m nowhere now’. That’s the one in the rehearsal room that just got me and gave me shivers.”

The songs, the plot, the imagery, it all adds up to Bowie’s final mystery. There are many interpretations as to what ‘Lazarus’ may really about. The play itself, like all of Bowie’s work, is a tapestry of media reflecting the horror, lust, loneliness, alienation love and loss of the world. There’s a mirror to the ongoing immigration debate, as an alien who has given so much but was ultimately rejected by this Earth finds acceptance only in Elly – named after Emma Lazarus, who wrote the poem engraved at the foot of the Statue Of Liberty. Then in the centre of it all, this fallen hero dreaming of escape but tortured by immortality as he wrestles to put his past to bed before he can find peace and leave this planet. Can you think of a more ‘Bowie’ farewell?

“It was a big loss, and in doing the show there was a weight,” concludes Sophia. “I was looking for answers when we came back, and there were a lot of things in the show that suddenly became really clear to me. There were things that I’d never even noticed.”

But as the man himself sung, he can’t give everything away.

“I think for David Bowie fans, this is his last piece of work and they’re coming to say goodbye to him,” says Amy. “This is the final page. When someone iconic passes, people realise what they’ve lost. If anything, I just feel really privileged to be part of this and carrying on his legacy.” 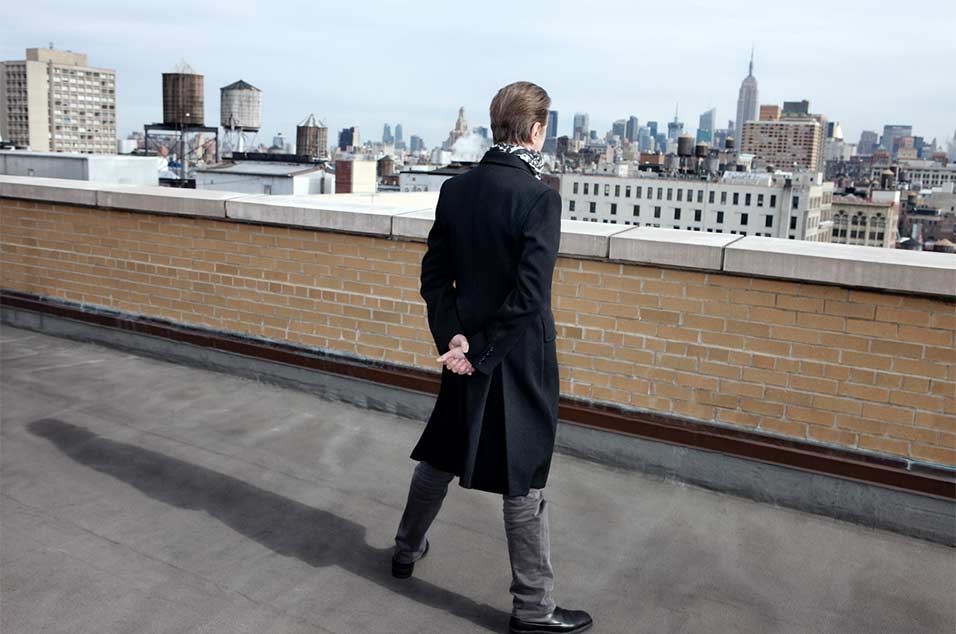 The physical release of ‘No Plan’ EP comes with CD versions set to hit stores on February 24 before the standard vinyl is released on April 21. It’s available to pre-order here.

The post The cast of ‘Lazarus’ look back on David Bowie’s final work and legacy appeared first on NME.

Plan B returns with new track ‘In The Name Of Man’

David Bowie’s ‘No Plan’ EP to be released on vinyl