The group, who hail from the city, also donated the proceeds from last night’s gig in Liverpool to the ‘We Love Manchester’ charity fund

Take That paid tribute to the victims of the Manchester terrorist attack during their return to the live stage last night (May 26) in Liverpool.

The three-piece, who hail from the city, played their first gig since the tragic events of Monday night at the Manchester Arena, which claimed 22 lives and left scores injured.

Take That were set to play at the Manchester Arena this weekend, but all three shows have been cancelled in the wake of the attack. The band will now play one date at the Etihad Stadium on June 18. Fans with tickets for any of the three cancelled shows can exchange them for the new Etihad date, or receive a full refund.

Speaking from the stage last night during their rescheduled show at at Liverpool’s Echo Arena, Mark Owen dedicated the gig to “everyone who has been affected by the events that happened in Manchester,” before adding that all profits from the show would go to the We Love Manchester emergency fund. 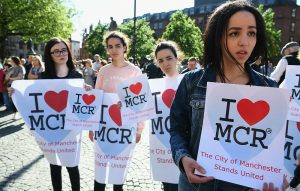 Fellow Take That member Howard Donald added: “As you know, I was born and raised in Manchester, so at this moment in time, I’ve never been so proud to be a Mancunian.”

The group’s de factor leader Gary Barlow said that it was going to be “an emotional night for us all.”

“We should have been playing Manchester tonight as you all know. We want to say an enormous, enormous thank you to all you guys out there who have come back, I know we were meant to here [Liverpool] on Tuesday, so thank you much for coming out tonight.”

Last night, Ariana Grande vowed in a new statement to return to Manchester to honour the victims of Monday night’s attack.

The post Take That pay tribute to victims of Manchester terrorist attack on return to live stage appeared first on NME.