An alternate ending for Star Wars: Rogue One has been revealed by one of the film’s writers.

The latest Star Wars film was released back in December, and was the first installment in the sci-fi’s franchise’s ‘Anthology’ series – set apart from the main story.

Spoilers for Star Wars: Rogue One lie ahead – proceed with caution

A co-writer of the Rogue One story has now revealed that the film could have ended on a much happier note.

Gary Whitta, who co-wrote the story with John Knoll, explained that the eventual decision to kill off the majority of the people on board the Rebel fleet (“If you’re going to give your life for anything, give your life for this, to destroy a weapon that going to kill you all anyway”) was initially at risk of upsetting Disney – meaning that he and Knoll devised another ending to potentially avoid creating such a dark ending.

“The original instinct was that they should all die,” Whitta told EW. “That’s what we always wanted to do. But we never explored it because we were afraid that Disney might not let us do it, that Disney might think it’s too dark for a Star Wars movie or for their brand.” 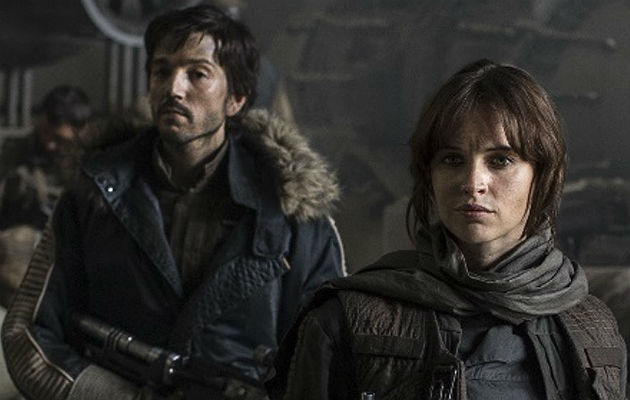 The alternate narrative Whitta devised meant there was no room for the characters Bodhi Rook, Chirrut Imwe and Baze Malbus, while Jyn Erso was cast as a Rebel sergeant instead of a criminal.

As for the story, Erso would survive the Scariff assault along with Cassian Andor, where a rebel ship would get them off the surface.

“The transfer of the plans happened later,” Whitta said. “They jumped away and later [Princess Leia’s] ship came in from Alderaan to help them. The ship-to-ship data transfer happened off Scarif.” He then confirmed that Darth Vader would still appear, this time destroying Erso’s ship – though she survived in this version of events, escaping in a pod with Cassian at the end.

However, Whitta stressed that he and the rest of the Rogue One creative team were never sold on this version of events.

“The fact that we had to jump through so many hoops to keep them alive was the writing gods telling us that if they were meant to live it wouldn’t be this difficult,” Whitta said. “We decided they should die on the surface [of Scarif,] and that was the way it ended.”

Meanwhile, the Blu-Ray release date for Rogue One may have been confirmed following an information leak last month.