Morrissey appears to have removed a new t-shirt he was selling that featured the lyrics “I wear black on the outside/’Cause black is how I feel on the inside” above an image of civil rights activist James Baldwin.

The t-shirt was to be sold on the singer’s upcoming North American tour, as well as his online store. The lyrics are taken from the Smiths’ 1986 song ‘Unloveable’.

However, the shirt has now been taken off sale at Morrissey’s web store amid criticism over the item. It is not known whether it will still be sold at Morrissey’s live shows.

Following the t-shirt’s unveiling, many deemed the design problematic, with one Twitter user writing “the Morrissey the less I like”. Another wrote “Morrissey is problematic. Nothing to see here, folks.”

See the t-shirt in question below: 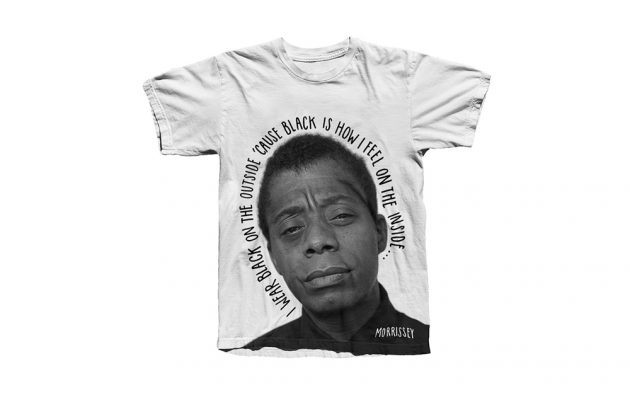 Meanwhile, the forthcoming biopic about Morrissey‘s life has been given a new title.

The movie is being made by Orian Williams, who worked as producer on the Ian Curtis biopic Control.

The film, which has not been authorised by the former Smiths frontman, will now be called England Is Mine, according to a new interview with Williams. It was originally set to be titled Steven, which is Morrissey’s first name.

The new title, as Morrissey-Solo points out, is a reference to a lyric in The Smiths‘ song ‘Still Ill’.

In the interview, which aired on SiriusXM, Williams also revealed that the biopic will end when Morrissey meets Johnny Marr. The film will largely explore the frontman’s youth and his “triumph over an alienated childhood to become the cult star he is today”.

Jack Lowden, who starred in the BBC adaptation of War & Peace, had been previously reported to be cast in the film, while Downton Abbey‘s Jessica Brown Findlay will reportedly play Linder Sterling.

At present, there is no release date for England Is Mine.