The Oscars suffered a drop in viewing figures for the third consecutive year last night (February 26).

The LA ceremony – hosted this year for the first time by US late-night chat show host Jimmy Kimmel – attracted headlines this year for primarily the wrong reasons, particularly after La La Land was erroneously announced as the winner of Best Picture – the honour having actually meant to go to Moonlight.

The US television viewing figures from this year’s ceremony have now been released, revealing that the Academy Awards have suffered yet another drop in ratings.

Broadcast on ABC, the ceremony ran for three hours and 49 minutes this year – the longest telecast in a decade – and attracted an average of 32.9 million viewers across the US. This figure is a 4% decrease from last year’s 34.3 million viewers, while it is also inferior to 2015’s 37.3 million and 2014’s 43.7 million viewers. 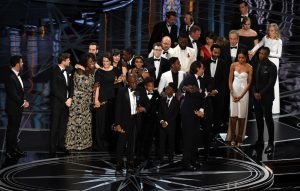 While the third consecutive drop in viewing figures will be of some concern to ABC, the broadcaster has reportedly generated $115 million in advertising revenue from this year’s ceremony.

See the Oscars’ US television viewing figures since 2000 below, via The Hollywood Reporter.