Singer had previously cited his ongoing battle with Marfan Syndrome

Former Of Mice & Men frontman Austin Carlile has revealed another reason why he parted ways with the metalcore band, having previously cited his ongoing battle with Marfan Syndrome.

Late last year, Austin issued a message to fans in which he admitted that he “won’t get better” from the illness, a rare fibrositic connective tissue disorder that painfully causes his body to seize up. This came after the band were forced to cut short their European tour so that Carlile could fly home for treatment for Marfan Syndrome. He later opened up about his battle with the rare disorder, discussing his faith and revealing that he once attempted suicide.

Having announced his departure officially at the end of last December, Carlile was asked by a fan on Instagram if he was still going to write with the band, to which he replied: “No I will no longer be writing with them, one of the reasons I left. They weren’t going to let me write what I wanted on next record. That’s not gonna happen. I will write what I want despite what that means giving up.” 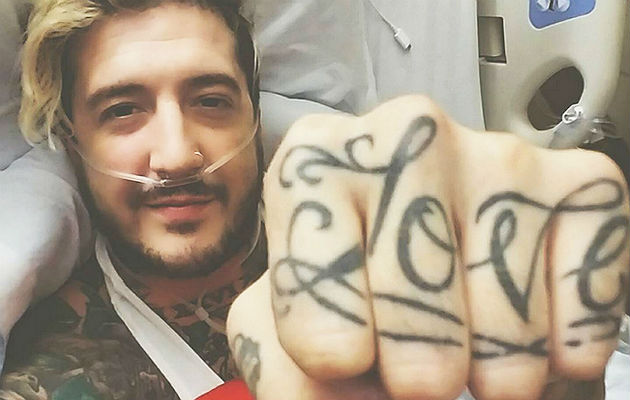 In the message that announced his departure, the singer previously wrote: “My heart is heavy… I never thought I would be writing this… Wanted to leave this announcement in the mess that is 2016.”

“I never thought my fibrostic connective tissue disorder Marfan Syndrome would cause touring to be so hard and painful for me,” he wrote in the statement. “I always thought the pain would get better one day, or that I would get better too. But this never happened, that day has still yet to come. From multiple surgeries, caused from touring over multiple years, and after cancelling a European tour half way through, this October 2016 finally brought me to my knees”

“My greatest fear had become a reality… I had 3 tears in my dual sac surrounding my spinal cord, and we discovered that every time I would push down to scream spinal fluid would rush though the tears which was causing me the violent pain every time I’d perform. It was causing my muscles to seize up, and body to contort on stage, and making me lethargic and sore every hour of the day.”

Carlile thanked fans for their support, confirming that he would still make music and stated that his Of Mice & Men bandmates would continue as a four-piece.

Carlile helped form the Californian band in 2009 before parting ways with the group briefly in 2010 due to ill health. He rejoined a year later.

The post Of Mice & Men frontman Austin Carlile reveals another reason why he left band appeared first on NME.

See Paul McCartney in costume for ‘Pirates of the Caribbean: Dead Men Tell No Tales’