Notorious B.I.G. documentary in the works

A new documentary on The Notorious B.I.G. is currently in the works.

The late rapper, also known as Biggie Smalls, will be the subject of the film in a project that has been approved by his estate and will be made in collaboration with his mother, Voletta Wallace.

Set to be directed by duo Emmett Malloy and Brendan Malloy, the tentatively-titled Notorious B.I.G.: One More Chance will focus on the impact and continuing legacy of Biggie’s music. The rapper was killed in a drive-by shooting in LA in March 1997. 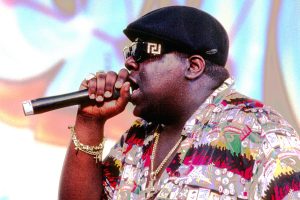 Speaking about the forthcoming project – which is being developed by Submarine Entertainment and ByStorm Film – the rapper’s mother elaborated on the happiness she derives from the lasting impact of Biggie’s music.

“It brings so much joy to my heart that my son Christopher’s music has made such an impact on the music community,” Wallace said. “His stories have positively inspired so many young men and women over the years, and [are] still influencing the youth all over the world today.”

The rapper was previously the subject of a 2009 biopic, Notorious.

Money was being raised last year for a bronze statue of Biggie – a campaign launched by the Hip Hop Hall Of Fame Museum.

The post Notorious B.I.G. documentary in the works appeared first on NME.

Watch two US news anchors pay lyrical tribute to Notorious B.I.G on anniversary of his death

The car the Notorious B.I.G. was fatally shot in is being sold for $1.5m

An ‘Escape From New York’ remake is in the works

Four different ‘Game Of Thrones’ spin-offs in the works