The first comeback interview: It’s been four years since London Grammar’s huge-selling and aptly-titled debut album ‘If You Wait’. Patience is a virtue, and now as 2017 promises world domination for the trio, we up with LG to talk about the long journey to album No.2

London Grammar have exclusively spoken to NME to give the first interview around their ‘dream-like’ new album.

The trio are currently adding the finishing touches to their long-awaited second album – the follow-up to 2013’s acclaimed ‘If You Wait’. They now find themselves in the stages of mastering the record, as well as deciding the final tracklist.

After dropping comeback track ‘Rooting For You‘ on New Year’s Eve and recording a cover of The Verve’s classic ‘Bittersweet Symphony‘, the Ivor Novello-winners aired their cinematic new single ‘Big Picture’ on US TV earlier this week as the promo campaign heats up. They’re finally back, after a few years recovering from the ‘madness’ that saw them nominated for BRIT Awards and collaborating with Disclosure on ‘Help Me Lose My Mind’.

“We definitely came back and lost our minds a bit,” nods London Grammar guitarist Dan Rothman, looking back at their return to ‘normal life’ after the whirlwind success of their debut and relentless tour schedule. “I think that’s natural. Most people in their mid-20’s have an existential crisis – or a quarter life crisis.”

Singer Hannah Reid chuckles: “That’s what people said about our first record, so we’re still in it!” 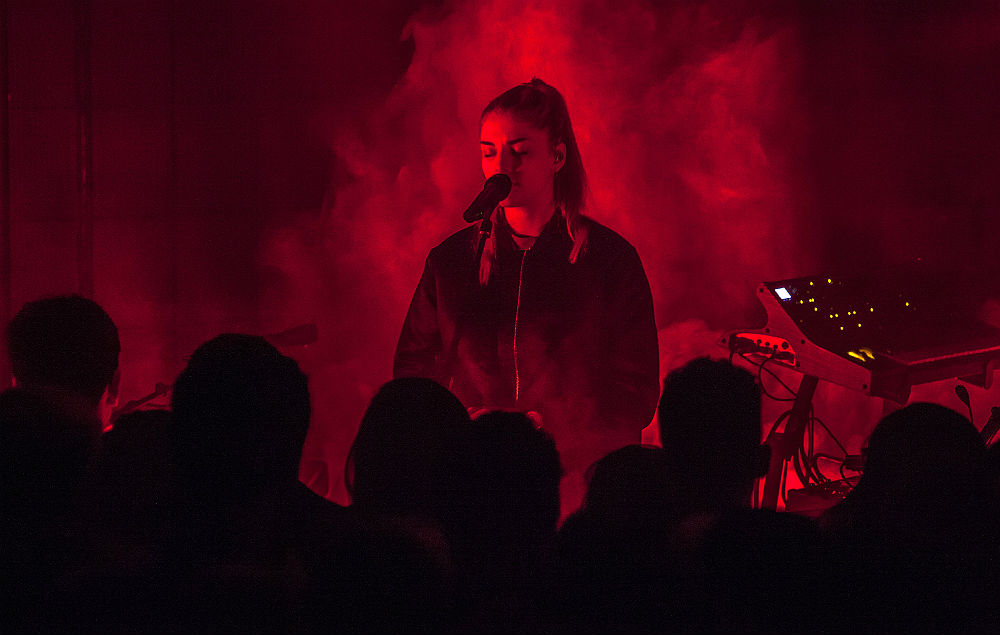 The band are spending a crisp, sunny London day chilling in their Camden studio – lounging as the sunshine bounces off gold discs that adorn walls. While the finishing touches are being added to their long-awaited second album, there’s very much a sense that this moment of respite is just the calm before the storm.

Their debut ‘If You Wait’ drew universal critical acclaim, with their slick but loaded trip-pop taking them from being three Notts Uni student mates jamming in each others’ bedrooms, to ending their tour with two sold out nights at Brixton Academy and accepting an Ivor Novello Award from Jimmy Page.

“I was talking to this girl who lives next door,” smiles percussionist and synth man Dot Major. “She said she was on this Reading Festival forum and there was a rumours of who was going to play and someone suggested us then another was like ‘oh no, they’ve split up!’ Everyone was like ‘yeah, for sure!’”

Hannah chimes in: “Another artist came up to me at a festival and was like, oh – you guys are playing? I heard that you guys had just stopped!’ I was like ‘no! And we’re still really good friends as well! Where has this come from?’ We probably like each other more than ever now.”

Dan agrees: “We’ve been lucky. We had our moments on the last one because it was fucking stressful on the last one, but we’ve managed to come through it.”

No they hadn’t split, nor were they hibernating. Their years in the wilderness saw London Grammar return to what made them want to be a band together in the first place: friendship, songwriting and living life as normal human beings. As you can tell from the two taster singles of ‘Rooting For You’ and ‘Big Picture’, the result of this and years at the drawing board is a ‘dreamlike, widescreen cinematic’ album – packed with ‘more variety’, a fuller spectrum of colour, and above all ‘more life’.

“The first album was a lot more about relationships, but then the second one is too – but in a different way,” reveals Hannah. “It’s probably about the relationship you have with yourself, rather than one specific other person. The relationship that us three had on the road, and there’s a lot about the meaning of life in general, which is SO lame, but that is what we talk about!” 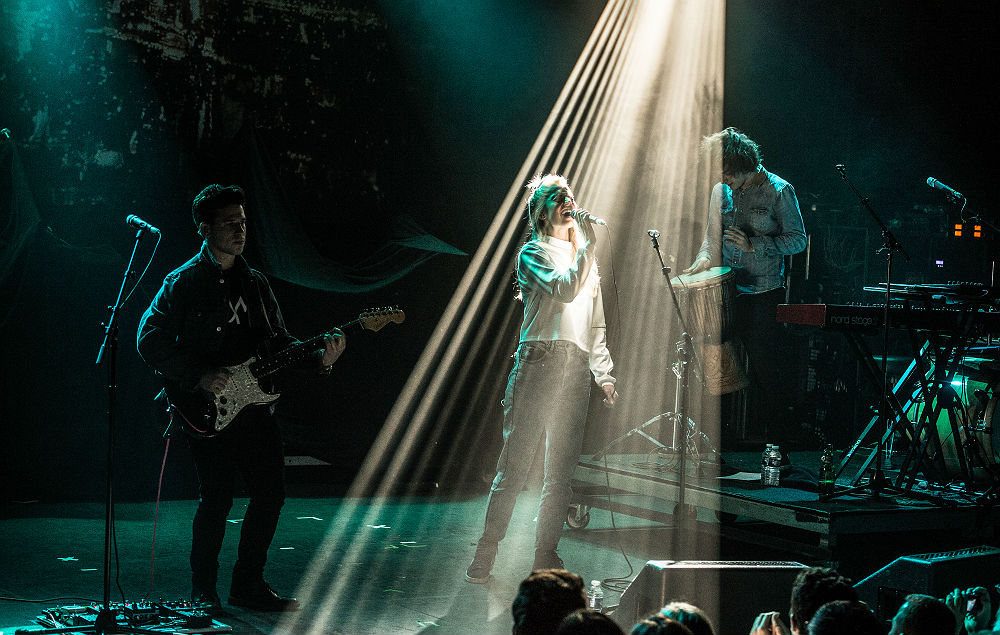 Turning to the ‘sound’ of the new album, Dan says fans can expect it to be ‘less moody than the first record’. “It’s maybe less ‘samey’,” he admits. “We’ve tried to provide more variety.”

“We’ve expanded on the filmic, cinematic aspect,” says Dot. “That’s maybe something that’s consistent throughout the new album, but in terms of what’s going on in different songs it definitely varies a bit more.

“The live experience should always feel slightly different to an album in general. The only thing that is different if that we’ve been informed by the experience of actually doing it. Sometimes it would feel so mad to have a section like that at the end of ‘Metal & Dust’, where we were worried that it might have been too far removed from what we actually are as a band. Having experienced that live, it slightly relaxes the band.”

When London Grammar burst onto the scene in 2013, they were among the most hotly-tipped new bands for that year – shoulder-to-shoulder with The 1975, Bastille, and Chvrches. All of which have since returned and become global phenomena in their own right.

“I think interestingly for us, those guys were always a bit ahead of us,” admits Dan. “They all put out records before us. We always felt like the junior band anyway.”

Dot continues: “The 1975 are the only band who released their record at the same time as us, and I feel like they’re the kind of band who write a lot on the road and stuff.”

So after time away on their own terms, London Grammar 2.0 is an entirely different beast – fully confident in its own skin and highly-evolved beyond any misconceptions or weak comparisons you may have once had about them.

“Oh, [back then] it was just The xx thing,” shrugs Dan. “I think that is going to be even less so now. It sounds like a completely different realm. No disrespect to them, because I think they’re amazing. It is the fact that there’s three of us as two girls and a boy – but it’s just lazy.”

Dot diplomatically interjects: “I do think that’s totally natural. The attention span that people have, and that’s not negative because I have it as well, but you look at something and you want a point of reference to mean if it’s going to be worth even five seconds of your time. Having some kind of comparison is inevitable. The xx are amazing, of course.”

So misconceptions aside, what can fans expect from London Grammar in 2017?

“They expect an emotional connection, above all else,” Hannah replies. “That is the most important thing.”

We’re just pleased their back, this time to help us lose our minds. 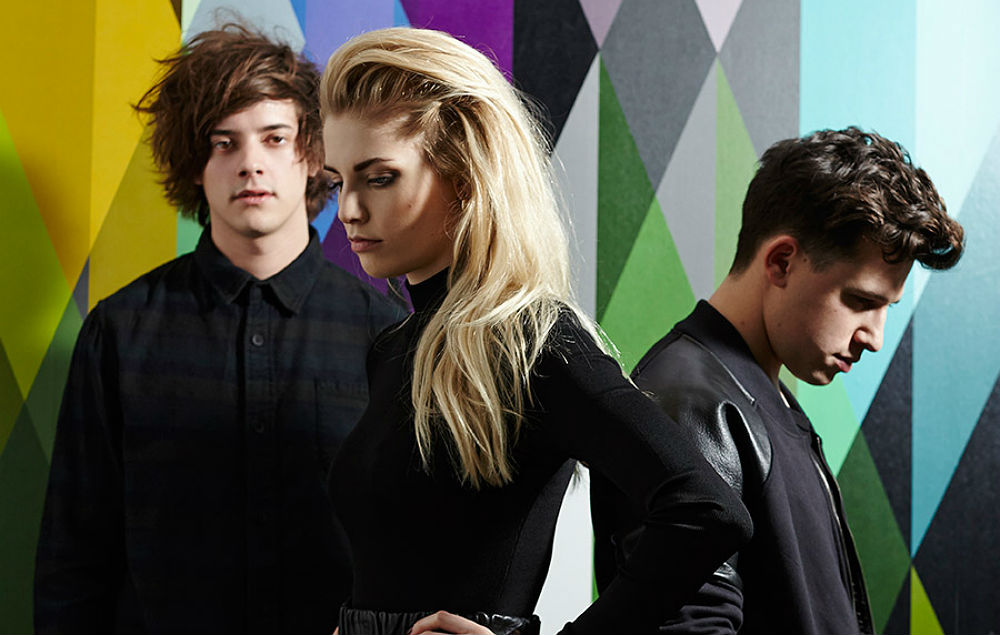 While last week the band appeared to self-confirm their appearance at Glastonbury 2017, London Grammar are expected to announce release details of their second album shortly, along with UK and European tour dates after recently being confirmed to perform at Finland’s Flow Festival alongside the likes of Lana Del Rey, The xx, Aphen Twin, Flume and many more. London Grammar have also been announced for Scotland’s new TRSMT Festival with the likes of Radiohead, Kasabian and Biffy Clyro – as well as Parklife with Frank Ocean and The 1975.

The post London Grammar discuss the journey to their ‘dream-like’ new album appeared first on NME.