Listen to a new remix of Gorillaz’s ‘Saturn Barz’

Gorillaz have shared a new remix of their song ‘Saturn Barz’ – listen to the new version below.

The original version of the track was one of four new songs to debut last month when the Damon Albarn-created band returned to announce their fifth studio album, ‘Humanz’.

Ahead of the release of that record on April 28, Gorillaz have now shared a new remix of ‘Saturn Barz’, which features guest vocals from Jamaican artist Popcaan. Canadian production duo Banx & Ranx are behind the new version, which debuted on MistaJam’s BBC Radio 1 show last night (April 1).

Listen to the new remix of Gorillaz’s ‘Saturn Barz’ in full here – the track begins at the 53:13 mark – or in the below radio rip, via Twitter. 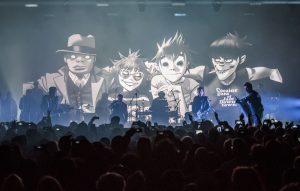 The recently released virtual reality video for the original version of ‘Saturn Barz’ last week broke YouTube records as it became the most-viewed debut of a VR video.

Elsewhere, the return of Gorillaz to the live arena is fast-approaching after the band announced their own Demon Dayz Festival, which will take place at the Kent theme park Dreamland in Margate on June 10. The full line-up is still to be announced.

The post Listen to a new remix of Gorillaz’s ‘Saturn Barz’ appeared first on NME.

Deadmau5 slams Steve Aoki for his ‘Ghost In The Shell’ remix