The actor, writer and director was due to tour the US with an ensemble of women later this month

Lena Dunham has cancelled her Lenny IRL tour with Waxahatchee because of ill health.

The Girls creator was due to tour the US later this month and into June with the team behind her Lenny newsletter and a host of female guests.

In the latest issue of the newsletter, however, she told readers: “Lenny is about giving 100 percent of ourselves, 100 percent of the time, and I couldn’t bear to limp through this. Not for you, our favourite people, and not for the women giving their time to join me on the road.”

She continued: “To be perfectly honest, I’m in the greatest amount of physical pain that I have ever experienced. After being told I was endometriosis-free after my last procedure, more disease was found in deeper spots that required immediate surgery and now physical therapy.

“This disease is wily and unrelenting, and I’m really blessed to have a community, both online and IRL, who let me express how hard that is. Inspired by you, I’m gonna say “Eff you” to embarrassment and walk the walk of a woman who really takes care of herself. My goals have to be simplified for this moment: to write and to heal.” 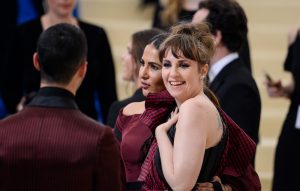 Dunham was recently rushed to hospital during the Met Gala in New York following complications from her recent endometriosis surgery.

She continued to explain that she would be making personal donations to all the charities that had agreed to partner with the tour and said all tickets purchased would be refunded in full. Although she did not officially confirm the tour would be rescheduled, she did write: “We hope to be back when my uterus has taken a chill pill.”

Nicole Kidman reveals she used to be engaged to Lenny Kravitz