Few, if any, bands would choose to make their live return after nearly seven years in an abandoned printing press plant by the River Thames in London. But then again, Gorillaz aren’t just any band. They’re the ‘virtual’ troupe, fronted by Blur man Damon Albarn, who may have headlined festivals all over the globe – but are always one to keep things fresh.

A day after dropping four banging new singles, Gorillaz took to Printworks in Surrey Quays, London to air a full playback of their upcoming album ‘Humanz’, with a smattering of guests to a handful of lucky fans.

Taking the stage just after 9pm, a brooding electronic instrumental welcomed the 11-piece band to the stage. “Thank you for coming at short notice” frontman Albarn says to the ecstatic crowd, before letting them know that they’re playing ‘Humanz’ in its entirety and that they’ve brought some of its star-studded lineup along as well.

Album opener, the Vince Staples featuring ‘Ascension’ is a pulsating start, as Staples’ furious flow is accompanied by a video of the rapper, who couldn’t make it to the show. ‘Strobelite’ showcases a different side to the band with a vibrant, disco-tinged number with help from vocalist Peven Everett, with ‘Saturnz Barz’ seeing Albarn stalk the stage and egging on his band members during the bass-heavy number. Soon after, long time collaborators De La Soul brought wickedly intriguing verses and a huge chorus on pop monster ‘Momentz’.

With the mood set, the crowd were soon implored to be unique by the song’s opening message –  “I promise to be different, I promise to be unique, I promise not to repeat things other people say”. Acclaimed US rapper Danny Brown then joined the fray, trading verses with Albarn as the song flitted from dancehall to neo-soul, resulting in one of the night’s most electrifying moments. 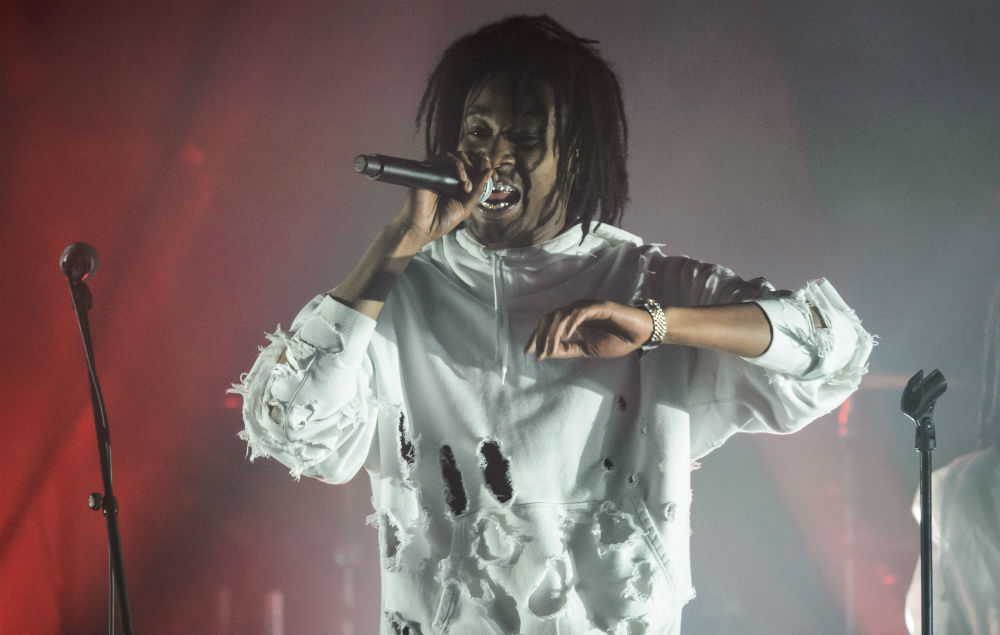 An unexpected rock-heavy track follows, with huge riffs and a brief Grace Jones feature at the end of ‘Submission’, with a pre-recorded video from D.R.A.M. bringing ‘Andromeda’ to life. ‘Busted and Blue’ provided the evening’s most serene and soothing interlude with the feature-less track allowing Damon to hog the limelight, but following track ‘Carnival’ flipped the script and celebrated the collective, with 12 people flooding the stage, including guest vocalist Anthony Hamilton, uniting for a soaring and glitchy soul epic.

Pusha T soon strides on stage for his starring role on the bouncy and fierce ‘Let Me Out’, with Mavis Staples’ powerful vocals dominating the track despite no appearance from the soul legend. Onstage chatter is still kept to a minimum as Damon twirls to piano as a twisted and joyful house-led stomper  ‘Sex Murder Party’ loosens up the crowd with Jamie Principle & Zebra Katz both featuring.

A subdued soulful number ‘She’s My Collar’ is up next, as its follow-up – the curveball comeback single ‘Hallelujah Money’ is anchored by Benjamin Clementine’s outstanding pipes, and results in the biggest reaction of the night thus far.

Though it didn’t last long, as the upbeat call-to-arms ‘We Got The Power’ closes the album playback in technicoloured fashion, as Savages’ Jehnny Beth cooley controls the crowd, and foe-turned-pal Noel Gallagher pops along to play guitar and lend his vocals to the set closer.

With the main set over, a brief break was punctured by the return of Damon and the band, as they kicked off the first encore with an undeniably faster and intense rendition of ‘Kids With Guns’. Members of De La Soul returned for a scorching version of ‘Feel Good Inc’, before Del Tha Funkee Homosapien and Noel Gallagher found their way back onstage for the encore’s closer ‘Clint Eastwood’.

After thanking all the collaborators for their time while recording the album, and giving the crowd a simple “love you”, a touching medley of ‘Don’t Get Lost In Heaven’ and ‘Demon Days’ lead by Albarn closed what proved to be a breathless and thrilling evening. Welcome back.

Don’t Get Lost In Heaven/Demon Days