Girlboss is a new Netflix show that tells the story of Nasty Gal creator Sophia Amoruso’s early years as a proto-entrepreneur. We spoke to the show’s star Britt Robertson about her immature character and how the show differs from Amoruso’s book.

NME: Girlboss is the memoir of Sophia Amoruso. What’s it like playing a real person?

Britt Robertson: “It’s funny, because I never really felt like I was playing a real person. We kinda created our own version of Sophia, and it was easy because I didn’t have to do that much background work – I could just use her as the best resource that anybody could ever ask for. For the most part after getting to know her and getting all the information and talking to Kay Cannon, our creator – and just understanding what this season and the series was going to be about and where they saw her journey going – then I just tried to let all of that stuff go and have a good time with the character and bring her to life as best I could.”

What was her involvement like? Was she on set a lot?

“She was really involved in the pre-production stage and she was really involved in creating Sophia’s apartment, and with the costume department and with the art design and production. She was very involved with the look of the show – but as far as the everyday filming I think that was beyond her understanding of what it’s like to make a television show. So she really tried to step back and not be too hands-on because I think it would be difficult if she was there everyday being like: ‘I wouldn’t do that like that’. She was really great in just letting me do whatever.”

For British viewers may not know Nasty Gal – can you explain briefly what it is?

“Nasty Gal was started after Sophia became really successful on eBay – then shortly after that she was kicked off eBay, so she decided to create her own website. She named it Nasty Gal Vintage after her eBay site, which was Nasty Gal, and it’s named after the song “Nasty Gal” by Betty Davis. Then she became really successful with her own online company and branched out from there, and became this brand essentially.”

When we meet Sophia, do you think she’s quite an immature character?

“Super immature, that’s a great way of putting it. I think she’s struggling a lot, like most of us in our twenties. I know I’m still struggling to figure things out and so it’s a good representation of what people may go through when they’re trying to figure what their life is gonna look like.”

How do you think Donald Trump would react to the show, given it’s about a self-made entrepreneur?

“That’s a good question. I dunno if he would necessarily understand the show. I’m sure there’s a part of him that would find it vulgar and not necessarily get it but maybe the self-made entrepreneurial aspect of it would be interesting to him? I know his daughter has sort of done that in her own right, so maybe he would be kind of interested. But it’s probably beyond him. He’s more interested in SNL and those types of things.”

Do you think your character in the show, Sophia is a role model or is she not quite yet? Do you think she’s going to become one?

“I don’t think she looks at herself as a role model and so I don’t think that you know it’s something she’s conscious of really. I don’t even think she had role models necessarily, she’s not the type of person who every really observed people in her life and was like, “Oh, I want to be that girl!” She just had a very strong sense of who she is and I think she was just trying to capitalise on that passion and that drive. For that age it’s very special to have that kind of quality and then find success from it.” 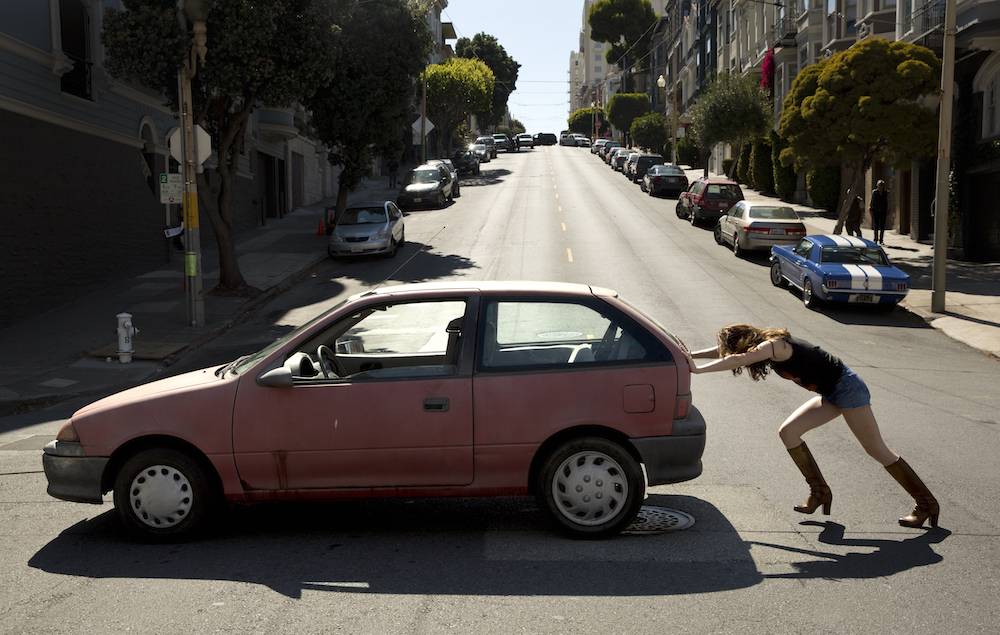 Would you compare it to any other shows?

“No, I mean it’s really it’s own genre of sorts you know? It’s a comedy but it has a lot of heart to it and it’s fun, it’s entertaining and it’s weird, and it’s out-there but I don’t know, I don’t think it fits in any box that’s been created thus far.”

And what about the humorous aspects of the show?

“That’s what initially drew me to the role – I like the idea of being able to take the story and make it funny and quirky. That’s what was exciting to do everyday: to just create moments and execute them. But in order to make all those moments fun you have to complement it with a little bit of pay-off, some reward, so I like the fact that Kay our creator wasn’t afraid to go there and to make her a real person with flaws and with humour, but also complex and sad.”

Had you already read the book before you read the script?

“No, I read the script, then I got the part, then I read the book. Wasn’t gonna read that stuff if I didn’t get the part…”

And what’s the difference between the show and the book?

“Well you know the book is more of a like, ‘How to…’ guide, like, ‘Here are the tips that worked for me’. The show is more of an origins story, like a retelling of this thing that was created and happened in the early 2000s.”

Girlboss hits on Netflix on April 21.

The post Girlboss star Britt Robertson on what Donald Trump would think of her ‘super immature’ entrepreneur character appeared first on NME.