He also called him ‘a supervillain in a world without heroes’

A blog in which Frankie Boyle delivers a scathing attack on Donald Trump and compares him to 50 Cent‘s G Unit has gone viral.

The acerbic Scottish comedian was writing on The Guardian, when he slammed Trump as ‘a supervillain in a world without heroes’.

“Trump cares about the same things a member of noughties rap outfit G Unit cares about: women, money and vengeance,” wrote Boyle. “Yet, random though it seems, his fight with the judiciary could well be tactical. He will blame them for the next act of terrorism that occurs then declare a state of emergency where everybody has to stay indoors while his tweets are read out over a Tannoy.”

Going on to write about the impact of Trump’s presidency on culture at large, Boyle said: “Obviously, the most important issue here is why America hasn’t done as well as in the past at capitalising on these horrors to create good music about the political turmoil. I mean, where is their Bob Dylan? Where are their anthems about drone warfare killing innocent civilians? Instead we’ve got Drake begging women via song to text him back after a fight at the Cheesecake Factory.

“Britain seems to be in an even deeper cultural torpor. Everything from Teen Vogue to young adult fiction has a more radical take than our press, and the Trump administration is satirised by American television with a venom that the British television industry, for its own government, does its best to avoid.” 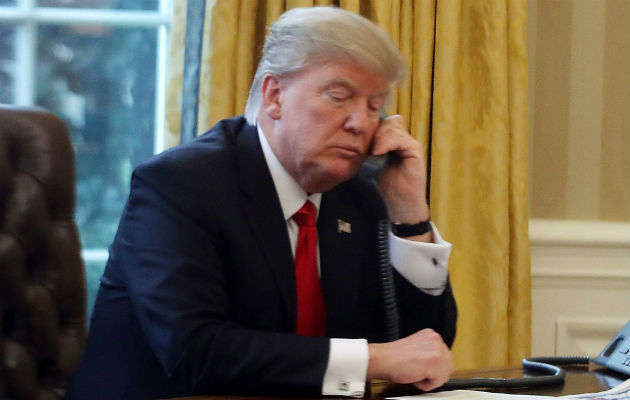 Speaking of Trump’s ongoing ‘war’ with Saturday Night Live, Boyle continued: “Trump is at war with Saturday Night Live. He thinks it’s horrible and yet he can’t stop watching. Pretty much the same as how the world feels about him. How can he expect to escape ridicule? Being on reality TV is the closest he ever got to reality. His children look like a teen movie about Wall Street vampires directed by Uday Hussein. He has cultivated a square face that’s the shade of a banned food colouring and the muscle tone of a coma patient.

“He looks like aliens came to Earth and made a human costume after seeing one commercial for a car dealership. Really, he seems like the sort of person that a competent leftwinger with a humane alternative offer should be able to beat at the next election. Sad, really, that the only way Bernie Sanders could return in 2020 is as a glass sliding about a ouija board.”

The Saturday Night Live sketch of Melissa McCarthy portraying Spicer as a gum-chewing, press-berating tyrant with a short temper and limited vocabulary made headlines and went viral over the weekend.  An unusual Twitter silence from The President followed, before Spicer later responded by saying that while he found the sketch “funny”, he felt that McCarthy “could dial back” a bit. He added that McCarthy “needs to slow down on the gum chewing; way too many pieces in there.”

Trump and the White House were later said to be ‘rattled’ by the skit – largely because Spicer being portrayed by a woman in drag ‘made him look weak’.

Watch Lorde get drowned out by male feminists in SNL sketch