Drake treated his tour crew to a cheeky Nando’s during their stop in Leeds.

Drake has reportedly treated his tour crew to £500 worth of Nando’s, after performing in the First Direct Arena in Leeds on Thursday (February 9).

Drake is currently on his ‘Boy Meets World’ tour. He is set to play Manchester Arena this weekend (February 11 & 12).

According to The Tab, Drake spent £534.55 on chicken and sides. A Nando’s employee shared an image of the order, which you can see below. 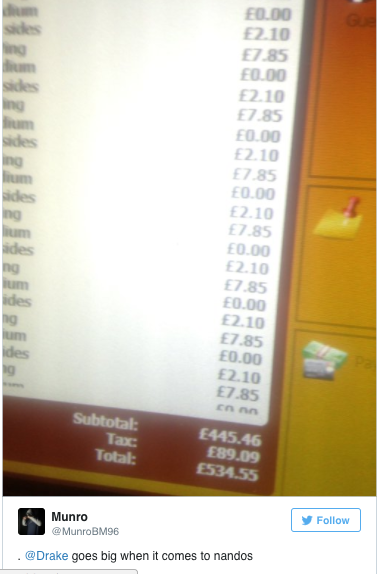 The Daily Mail also claims that none of the chicken was above a medium heat. Nando’s reached out to Drake on Twitter after the visit, writing ‘.@Drake back at it again with the Hotline Wing…’.

Meanwhile, Drake’s show at The O2 in London last week (February 2) resulted in him offering a refund to all fans in attendance, after guest Travis Scott fell off stage.

After several delays due to production issues, Drake finally kicked off the London residency of his ‘Boy Meets World’ tour early last week – bringing out the likes of Section Boyz, Giggs and Kyla on the opening night.

However, his second show in the capital didn’t fare quite so well. During the track ‘Goosebumps’, Scott fell into a hole in the middle of the stage, damaging part of the set. As BBC reports, Scott wasn’t hurt but he did reportedly damage the centre-piece of the huge globe, which then couldn’t be used.

Drake then promised the audience that the show would be “for free tonight” and he’d “deal with it later”, adding “you can pay for it later.”

Towards the end of the gig, he later repeated: “London England, I love you, I hope you enjoyed your free show.”

Watch Drake speak out against Trump at London gig