Chicago’s Trump Tower is to be obscured by pigs inspired by Pink Floyd for one day this summer.

The building will have four gold pigs placed in front of it that will cover up the President’s name.

Architect Jeffrey Roberts is behind the stunt and announced the installation, called ‘Flying Pigs On Parade’, last November.

As Architectural Digest reports, each pig is 30 feet by 15 feet and will be tethered to a barge on the Chicago river. Roberts also plans to move them to other cities in the US with buildings owned by Trump. 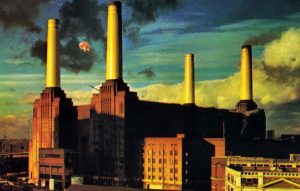 “In 1977, Pink Floyd rendered their musical interpretation of the allegory into the concept album ‘Animals’ in response to social-political conditions in late-70s Britain,” Roberts said of the project on its official website. “Like Orwell’s book, the interpretative messages of ‘Animals’ have unfortunately become highly relevant again.”

Pink Floyd’s Roger Waters holds the image rights himself so needed to approve the architect’s plans. Roberts continued: “The art folly has been created to provide visual relief to the citizens of Chicago by interrupting the view of the ostentatious Trump Tower Chicago sign.

“The design follows rigorous rationale in providing layers of meaning but ultimately allows for interpretation by individual viewers.

“Ultimately, this is a very rational design and is in direct contrast to the chaotic nature and bizarre antics of our current leadership.”

A date is yet to be confirmed for the pigs to be put in place, but the project’s website says Roberts is “negotiating a float date in late summer”.

The post Chicago’s Trump Tower to be obscured by Pink Floyd inspired pigs for one day appeared first on NME.