‘Liam should win an award every year just for being Liam’

Blossoms have declared that ‘Liam Gallagher should win a Brit Award every year’ – as well as discussing progress on their ‘Kylie Minogue meets New Order‘ new album. Watch our video interview with the band above.

NME caught up with the band on the red carpet of the Brit Awards 2017 – where they were nominated for British Breakthrough but lost out of Rag’N’Bone Man.

Drummer Joe Donovan: “We’re big fans of the Gallaghers and Oasis, so anything they do is gonna be dead exciting. I just hope I don’t bump into him at one of these things because I’m a full-on fan boy and I’d just lick his face.”

The band released their acclaimed self-titled debut last year – but say that work is already well underway with the follow-up – and we may be able to hear it in 2017.

Asked about the pressure of writing it, Ogden joked: “I’m just crumbling inside – I might just joss it after this and just leave it. I’ve been writing for a second album. I’m confident. I just carried on writing after the first one, really. I’m always writing and it’s exciting. We’re not in a rush to release it, but we don’t want to wait too long. I’ve been demoing stuff and it sounds really good.

Revealing that it had a “Kylie Minogue meets New Order sound”, Ogden added that fans may be able to hear it “maybe summertime? If we get round to it. Maybe this year, I hope we’ll end up playing some new stuff.”

Meanwhile, Blossoms are set to headline the NME Awards Tour 2017. See full tour dates below. Tickets are on sale now and available here. 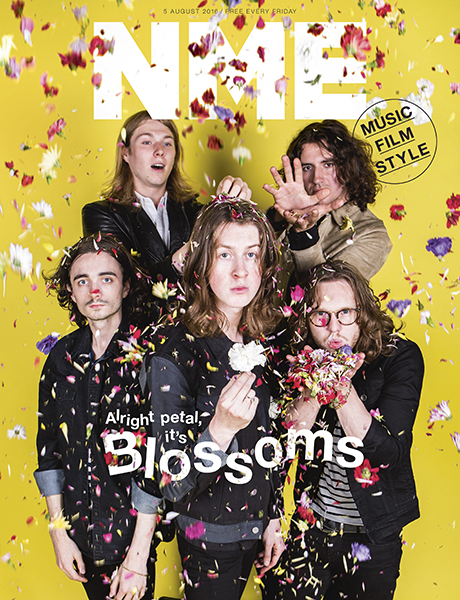 The post Blossoms on ‘licking Liam Gallagher’s face’ and their ‘Kylie meets New Order’ next album appeared first on NME.