Bastille have responded to rumours that they have shot a cameo role for Game of Thrones season 7.

In January, a source for Game of Thrones fan-site Watchers on the Wall reported that the four-piece had been in character as wildlings on the set of the fantasy epic at Wolf Hill Quarry in Northern Ireland. The fan site has a history of accuracy with developments in the show’s production, and it described the huge scene the band were reportedly involved in as featuring “hundreds of extras”.

Speaking to NME at the VO5 NME Awards 2017 last night (February 15), the band denied any knowledge of a cameo, with drummer Chris Wood calling their presence on set as “purely a studio tour… some say tour, some say breaking and entering. Who knows?”

As he was asked about their set visit, frontman Dan Smith smiled and laughed before adding: “Yeah, just a studio tour. We’ll see. We’ll see. When the episodes come out and we’re nowhere near them it’ll be like a fart in the wind. But yeah, we’re big fans of the show.” Watch the band’s full reaction in the clip above. 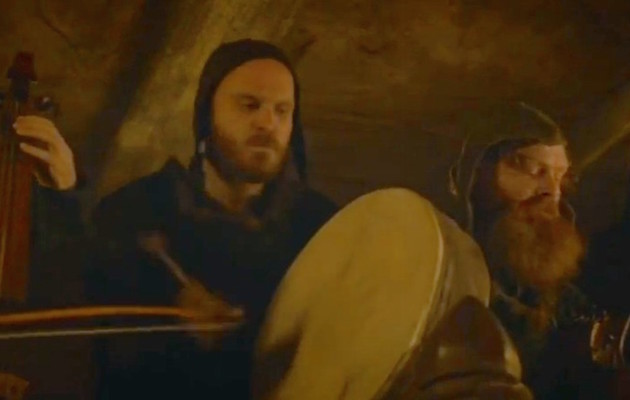 Bastille already have a connection to the show: they cast Sophie Turner, who plays Sansa Stark, in their 2014 video for ‘Oblivion’.

There is already a precedent for musicians being given cameo roles in Game of Thrones: Coldplay‘s Will Champion appeared in The Red Wedding episode as a drummer (pictured above) while Sigur Rós, Snow Patrol, Mastodon and Of Monsters and Men have also featured in the show.

Game of Thrones season 7 recently finished wrapping and will return later in 2017.

Game Of Thrones Season 7 will see characters “coming together”